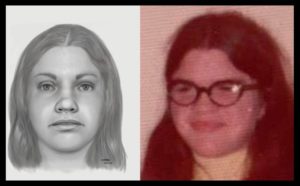 In April 2019, I joined the Williamson County Sheriff’s Office Cold Case Unit in Georgetown TX. Initially I had just offered to do forensic art for them but because I am a former police officer, they asked if I would also be interested in doing investigations. They assigned me to their 3 unidentified remains cases. One of them is Orange Socks.

This victim’s remains were found in a culvert alongside Interstate 35 north of Georgetown Texas on Oct 31 1979. She was nude except for a pair of orange socks, thus earning the unidentified victim the name of Orange Socks.

Serial killer Henry Lee Lucas confessed to killing her and was convicted of the murder in 1984. Although Lucas confessed, police are now not convinced that he really committed this murder.

Williamson County reopened the Orange Socks investigation with the formation of the Cold Case Unit in 2017. When I joined in 2019, they requested I draw an updated postmortem image. In the case file, I found only a few morgue photographs and the original postmortem image developed in 1990.

Upon an internet search, I discovered other postmortem images had been developed over the years. Unfortunately, the good work done by these artists did not provide any information leading to the successful identification of Orange Socks.

I decided to do a new digital postmortem image. I wanted to emphasize the snub nose, the victim’s youth, and some slight differences in some of her facial features to make her a little less masculine looking than the previous images had shown.

With the advantage of digital technology, the finished drawing stays true to the original evidence. Digital duplicates can be sent to clearing houses, media, and law enforcement agencies without fear of distortion or loss of shading.

Within a week of the media release in late June of this year, we received a call at the Cold Case Unit from a woman who said she thought my image looked very much like her half-sister Debra, whom she hadn’t seen since 1976 or 1977. We made arrangements for her to come in on the following day for an interview. She brought photos of Debra. In the interview we learned that there was dysfunction in the family and Debra had never been reported missing.

I was assigned to the Orange Socks case with DNA Doe Project, as they already had the DNA from Orange Socks to start the forensic genealogy workup. This type of DNA data file is uploaded to the GEDmatch website which compares the file to thousands of people’s family tree files already uploaded online. This site has over a million people who have loaded their DNA data files onto the site in the hopes of identifying family members by finding others with large segments of DNA in common with their own.

I took the family information provided by the half-sister and began building a family tree for Debra Jackson. I found one 2x great grandfather for Debra that had the same name and DOB of a man that was on the tree we’d been building separately for Orange Socks – they were the same person. That made me think we were on the right track with Debra possibly being our victim. I gave this info to the team, and we ended up continuing to build the trees and finding several other matches with other ancestors in common on both Debra and Orange Socks’s trees. For a final scientific confirmation, we obtained DNA from Debra’s half-sister. The results showed her to be the half-sister of Orange Socks. After forty years, Orange Socks is now positively identified as Debra Louise Larned.