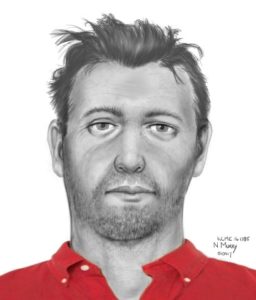 The Wahkiakum County Coroner’s Office has released new information about the unidentified human remains discovered on the shore of the Columbia River last June, including a reconstruction of the man’s face by forensic artist Natalie Murry.

Working in conjunction with forensic anthropologist Dr. Katherine Taylor and with direct access to the decedent’s remains, Murry, who has over fifteen years’ experience in forensic art, created the attached reconstruction. (The eye color and hairline, which cannot be determined
from skeletal remains, are conjectural.)

Contemporaneously with this reconstruction, the Wahkiakum County Coroner announced additional details regarding the personal effects found with the deceased. Prosecutor/Coroner Dan Bigelow said, “I had been keeping this information private both because it may have been useful in eliminating false claims, which happens sometimes, and because by releasing it I might be revealing the name of a relative of the deceased. But after six months with almost no movement in the case, I think it’s time to lay all my cards on the table.”

The newly released information is this: while the decedent carried neither keys nor identification and wore no jewelry, his pocket contained a key ring that held two objects: a flat rectangular metal tag 1.25 inches by .75 inches with a cartoon picture of a girl or woman on it along with the name “DEBBIE,” and a very small ring, possibly a child’s, with a dark stone set in it. “It’s important not to read too much into things,” Bigelow said, “But it doesn’t seem like a giant leap to imagine the decedent knew and cared for someone named Debbie, maybe a daughter.”

This information supplements what was already known about the decedent:

• He was male, Caucasian, probably within a few inches of 5’8” tall, and anywhere between 30-60 years old (though there are circumstantial indications that the decedent was of middle age or older).
• He was dressed for the outdoors in Vibram-soled boots (size 10), a red button-down shirt, Levi’s jeans (38-inch waist, 32-inch inseam), and black rain pants.
• He was carrying a microfiber optical lens cleaning cloth that had an advertisement for a West Seattle optometrist’s office printed on it.
• He probably did not die where his remains were found. Instead he could have disappeared in any area that contains water that feeds into the Columbia River, whether in Washington or Oregon. He is most likely to have gone missing somewhere between the west side of Cascade Locks and the eastern part of Wahkiakum County.

Anyone with information that may lead to the identification of this decedent is urged to contact Wahkiakum County Prosecutor/Coroner Dan Bigelow at (360) 795-3652 or by email at dbigelow@waprosecutors.org.

Find out more about forensic artist Natalie Murry at http://www.nataliemurry.com

UPDATE 011317 This subject was identified through a Cold DNA match as Richard Arneson, missing from the Seattle area since February 2016. He was 62 years of age when he went missing. In the drawing, I went with an age closer to 40 because of his dental condition. The photographs of this victim show the asymmetrical nature of his mandible and mouth as shown in my drawing. I think adding another 20 years would have been a pretty good hit.